The main residence, which was constructed in the mid-1850’s, is Lshaped in plan, composed of a primary three-story block situated perpendicularly to the road and a two story wing appended to the southwest side. An early photograph also shows what appears to be a one-and-a-halfstory frame extension adjoining the east, or street side, of the house. Judging from a painting that was executed in about 1905, this gabled extension was quite substantial in size, and it may have been the original Ayres farmhouse, constructed in the opening years of the 19th century. This portion of the house is believed to have been removed when Cooper Road was widened during the 1920’s.

The two remaining sections of the house appear to be contemporaneous, and they are both of frame construction on a rubble stone foundation. The original horizontal lapped siding remains intact beneath peeling asphalt shingles that were applied earlier in this century. The main block is completed with gable end returns, and the eaves and raking cornice are marked by a simple crown moulding. Penetrating the center of the gabled roof is an original brick chimney; a heavy stone chimney was added to the south wing during the 1920’s. Asphalt shingles cover the roof of the primary block, while the flat roof of the wing is tarred and graveled. A one-story, shed-roofed porch, with simple, square-section posts and balusters, shelters the street side of the house.

The rigid symmetry of the Federal and Greek Revival Styles was not observed during the construction of the Knuth House, and window placement appears to have been dictated more by necessity than architectural convention. At the first and second stories, the windows are 6/6, double-hung units; at the ground level, the fenestration is a combination of 6/1 units and paired, 6-light casements. While the glazing and muntins remain virtually intact, the prominent drip caps which highlighted the top of each window, were either removed or covered by the 20th century shingles. Operable louvered shutters remain on several of the front windows, but others have been removed.

Three entrances serve the front of the house, one in each of the north and south elevations, providing access to both the front and the back of the main entry hall, and a third door which opens onto the parlor level of the south wing. Each door is of a different configuration; the most prominent of the three, the south door, is a four panel unit, with a two-light transom above. The two remaining doors of of six-panel configuration; the one to the north is made up of three sets of double panels, while the door on the west elevation consists of two sets of three panels each.

Having suffered few changes to either its form or fabric over the years, the interior of the Knuth House might be described as pristine. The only indoor plumbing consists of a sink in the kitchen; bathrooms and central heating equipment were never installed, therefore, the initial floor plan has survived. A few surface mounted electrical outlets dot the walls at the ground and first floors, and three ceiling mounted light fixtures have been installed; the upper floor, however, was never electrified, and the plastered surfaces remain entirely intact.

As was customary, the ground floor spaces were reserved for the day-to-day, utilitarian operations, with five rooms dedicated to the household chores. Throughout the 19th century, the keeping room was located in the main block of the house. During the early 20th century, however, the room in the south wing, originally the pump room, was converted into a kitchen, and the cooking stove, with wood piled high around it, still remains in place.(Photograph 7) At the east end, running the width of the house, is a narrow room with whitewashed stone walls, which was originally part of the half-cellar of the now demolished wing. Located on the north side is a small area with stone walls and floor, which may have originally functioned as a buttery.
At the parlor level, extending from the front to the back of the house on the east side, is the main hall. The remainder of the first floor is divided into four rooms, plus an additional room located in the south wing. At the second floor, four bedrooms correspond in size and shape to the public rooms below. A doorway, located in the east wall of the hall, originally connected the second floor hallway with the wing to the east that has since been demolished.

With the exception of two rooms at the ground level, the original pine floorboards remain intact throughout the house. The kitchen floor is covered with 1930’s-vintage linoleum, and replacement oak flooring has been installed over the earlier boards in the original keeping room. At the upper levels, the floors have survived in remarkably good condition, and only at the ground level, where the wood is close to grade, has the original material suffered. In the ground floor rooms, beaded board wainscotting topped with a heavy dado rail lines the walls, and beaded board cupboards, complete with acorn-tipped, cast iron hooks, are located in two rooms. Although cracked and damaged in two areas due to water infiltration, the original plaster walls and ceilings remain in place. The walls and ceiling of the spacious attic are also finished with plaster, indicating that this area may have been used to accommodate hired help. The plastered ceiling exhibits penciled graffito from 1897, shortly after the house had left the Ayres’ ownership.

Throughout the building, most of the original trim has survived. The 10″ high baseboards at the first and second levels are capped with a reverse ogee moulding, while the less ornate baseboards at the ground floor are topped with a simple bead. Surrounding the doors and windows are wide architraves, marked with a quirked reverse ogee with a bevel and bead; below each window is a beaded apron. Although stoves were used exclusively to heat the house, highlighting the chimney breasts are simple, but well-proportioned, mantelpieces and shelves. (Photograph 8)

Utilitarian board and batten doors with cast iron latches serve the ground floor rooms and each closet. Connecting the main level rooms, however, are four-panel doors highlighted with reverse ogee moulding. Each of these doors is hung on cast butt hinges and retains its original black rim lock with white porcelain knob. Currently, these doors are painted, with the exception of the interior face of the attic door, which exhibits a vernacular approximation of “faux bois” graining.

Designed to impress the entering visitor, the main hall is one of the most elaborate areas of the house, with its open stringer stair, turned balusters and heavy mahogany newel and handrail. The location of the hall at the side of the house was no doubt dictated by the existence of the former east wing; essentially, this building was configured in a center hall plan until the demolition of the extension to the east.

The Ayres/Knuth House is not a high-style mansion; it is simply a very well-preserved, vernacular farmhouse, constructed in the mid-1850’s. An extremely large percentage of the original fabric has survived intact, and no discernible changes have been made to the floor plan. Most of the material remains in excellent condition, although several years of neglect have begun to take their toll. 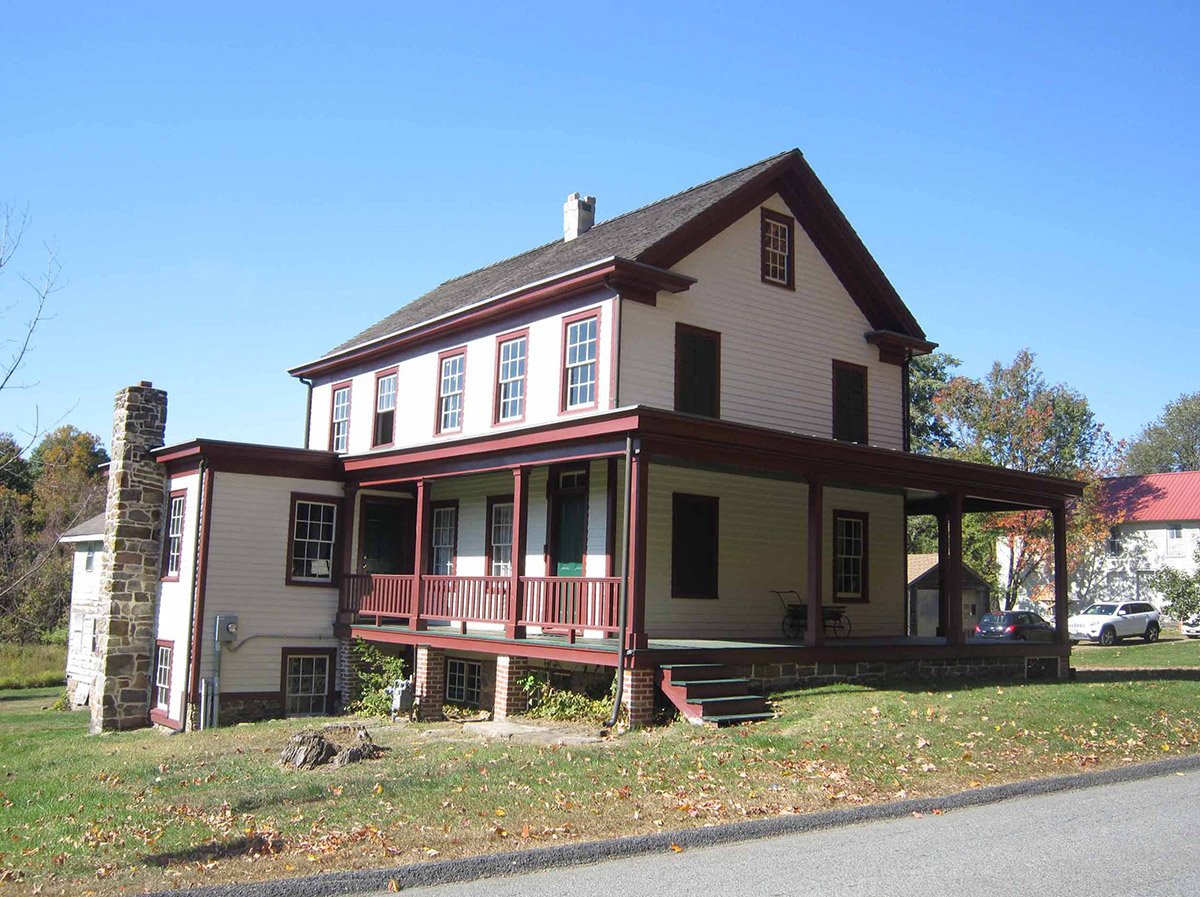 …the interior
of the Knuth House
might be described
as pristine. 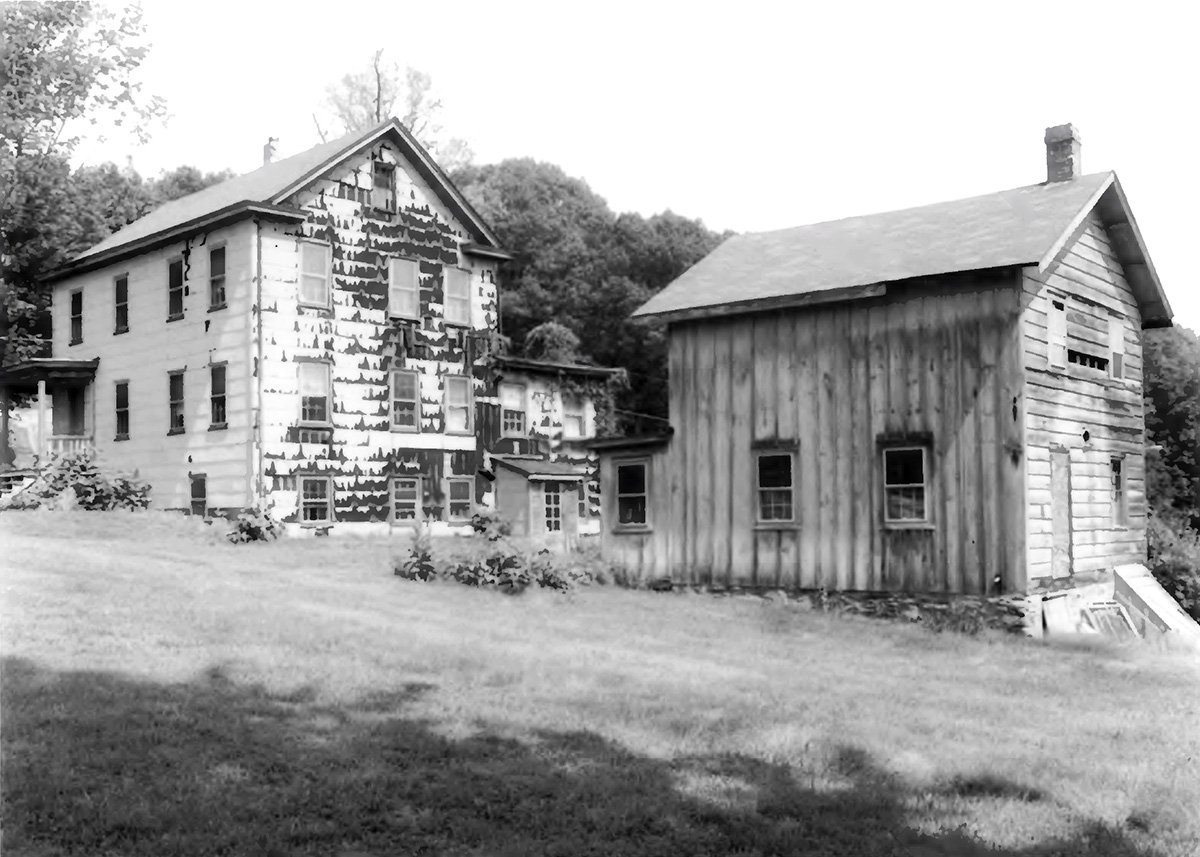